The Sacramento River Cats are a minor league baseball team who make their home at Raley Field in West Sacramento.

Last year, the River Cats were named “most valuable minor league team” by Forbes – and I can see why. (story here)

I have been meaning to catch a River Cats game anyways, so when a buddy came into town for a visit it was the perfect excuse to go.

Baseball games at Raley Field are definitely a family affair. It happened to be “Star Wars Night” at the field, and the stadium was packed with families wearing matching Star Wars t-shirts and waving plastic light-sabers around.

We bought cheap tickets and sat on “Home-run Hill,” a raised lawn with a nice view of the field, once the sun goes down. 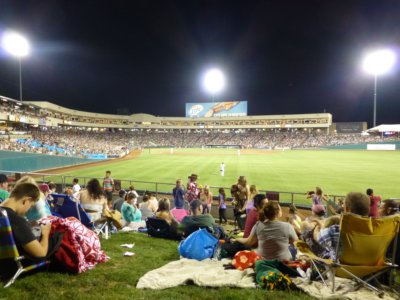 At the end of the first inning, the score was 2-2, and it stayed that way for the next seven innings. Despite a relatively uneventful game, the hosts did a great job of keeping the fans engaged with a mascot race, hot-wing eating contest, and other fun games.

There was a silent auction for the special game jerseys, benefiting the Red Cross, and visitors were invited to join Cats Care, a community volunteerism club.

The evening ended with a fireworks show. Families folded up their beach chairs and blankets while a few opportunistic kids rolled down the hill. A boy scout with red hair and freckles, who had been sitting next to us through the whole game, looked at me and said “Wasn’t that awesome?!”

If it weren’t for the glowing light-saber in his hand, it would have been a perfect Norman Rockwell moment. 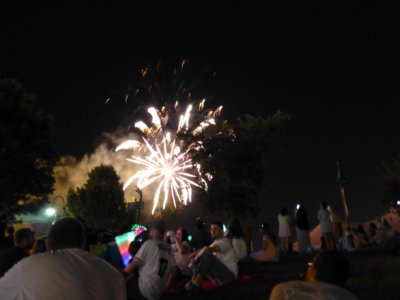 If you are bummed about missing Star Wars Night, there are a lot of other fun times to go – Sleepover Night, Swing for a Cure, Princesses and Pirates Night, concerts… check the promotion schedule for more info.